How To Make a Nature Poem

Given the advances in our understanding of human and non-human life, as well as our ecologically, biologically, and culturally intertwined lives, here I articulate how to make a nature poem with nature. In this biotechnologically-informed methodology, I first scramble the text of a poem using an organism’s DNA, and second use the generated sentences to construct a new collaborative poem. Testing this methodology, an excerpt from the pastoral poetry of Virgil describing man’s mastery over nature is processed into a new text. In addition to exploring new ways of experimental writing, this technique aims to foster artistic dialogue and cross-pollination between man and nature and between the sciences and the humanities (Figures 1, 2). 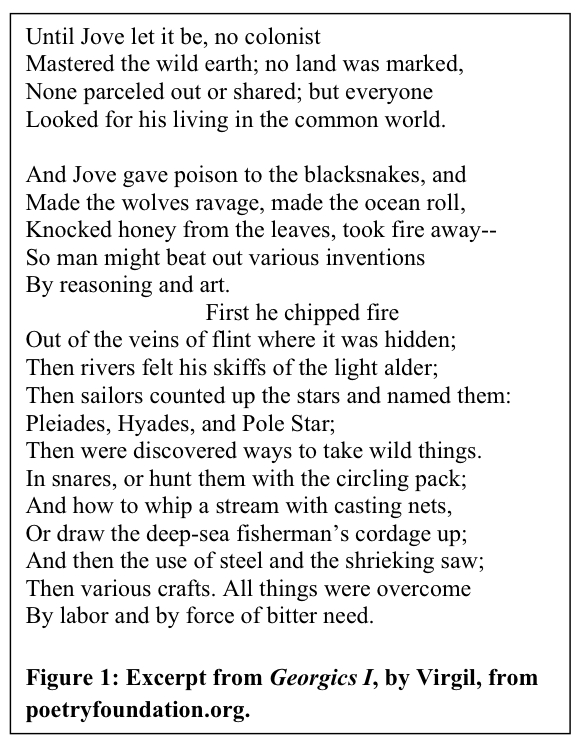 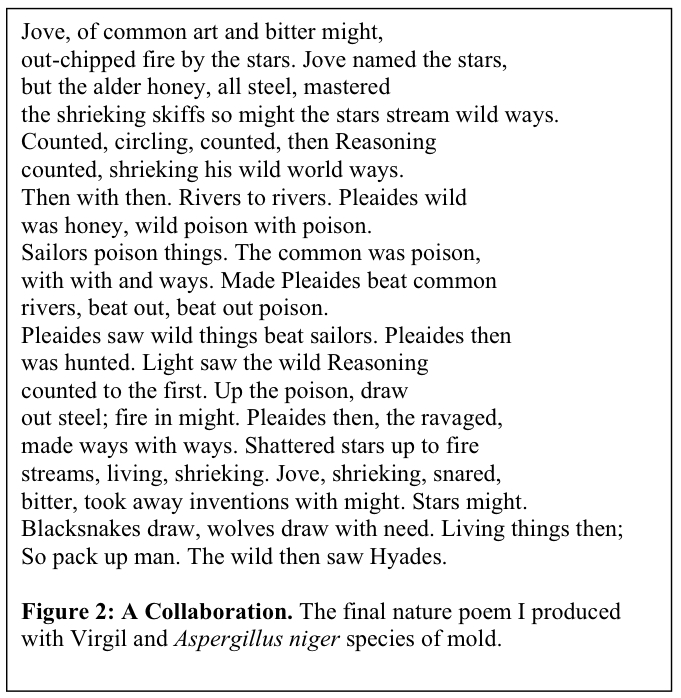 The organism used in this method is a species of common mold, Aspergillus niger, which is known to grow and degrade water-damaged books. From the National Center of Biotechnology Information database, I retrieved the DNA sequence of a protein studied in Aspergillus niger, and from the Protein Data Bank a schematic of the 3D shape of the protein. This Xylanase protein, which allows A. niger to decompose plant matter, is currently being investigated as an alternative to the bleaching chemicals used in the paper pulping industry. Within the simultaneously deconstructive and constructive method I propose here, I found it poignant to use an organism that can degrade a book by its growth as well as produce a book through the biotechnological use of its enzymes.

To begin the method, I distributed the words of the poem to three letter combinations of a, c, t, and g DNA building blocks, such as ATG and TTT. In the cell, these three letter arrangements, known as “codons,” are used in the conversion between DNA and protein. This method utilizes the 64 codons appearing within the DNA to scramble the original text. I matched the first codon appearing in the standard DNA codon table, TTT, to the first word of the poem, “until.” I then matched the second codon, TTC, to the second word appearing in the poem, “Jove,” repeating this process until every word of the poem had been matched up with a codon. In the end, every codon had been matched up with two or three words from the original poem (Figure 3).

I utilized these codon-word matches to scramble the original text. Below is the process conducted on the first sentence of the new poem. First, I examined the DNA sequence of the Xylanase protein from Aspergillus niger.

I then substituted each of the codons with their corresponding words. Relying upon my own artistic impulses and word associations, as well as the context of the original poem, I chose only one word from each codon to construct a new sentence:

I slightly edited this sentence by adding articles and punctuation:

Jove, of common art and bitter might, out-chipped fire by the stars.

To further inform the construction of these sentences, I examined the 3D structure of Xylanase protein. The building blocks of the protein interact with each other to form smaller shapes known as secondary structures, with three general types. I interpreted these turns, helixes, and beta strands as poetic devices. I constructed the sentences according to the motif or meaning expressed by each device (Figure 4). 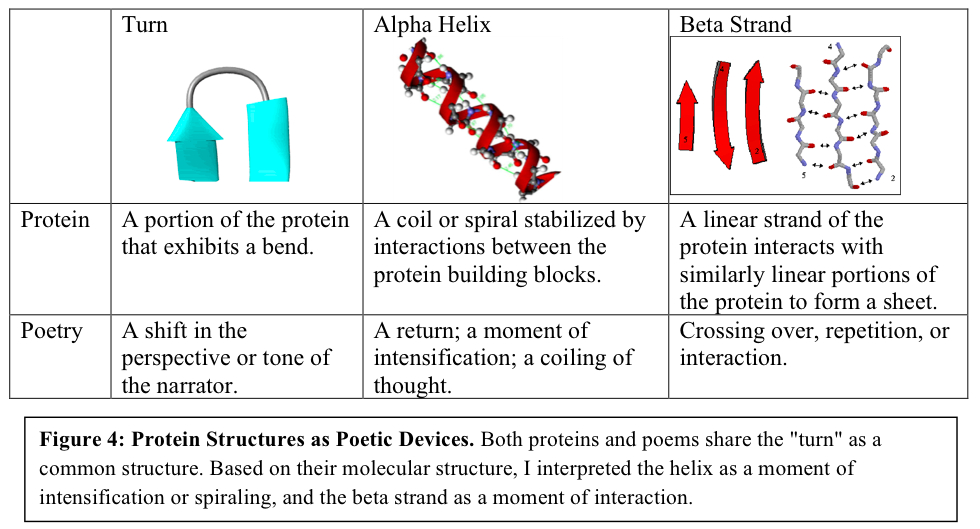 For instance, observing a repeated codon in the DNA sequence and reading over the possible word choices I could make, I felt prompted to apply the “beta strand” device and construct the sentence to express repetition:

I categorized the sentences according to the protein-literary devices that inspired them, for instance, grouping together the text that express a turn. To organize these sentences into a larger poem, I chose a sequence of the protein with as many building blocks as the lines of the poem and all three poetic-literary devices. The schematic of this sequence shows the secondary structure each building block participates in; I interpreted this schematic, associating a device with each line of the poem (Figure 5). The chosen section of the poem contains a beta strand, alpha helix, beta strand, turn, and a beta strand in that order. Returning to the sentences, I decided their order in the poem based on the device associated with each line. 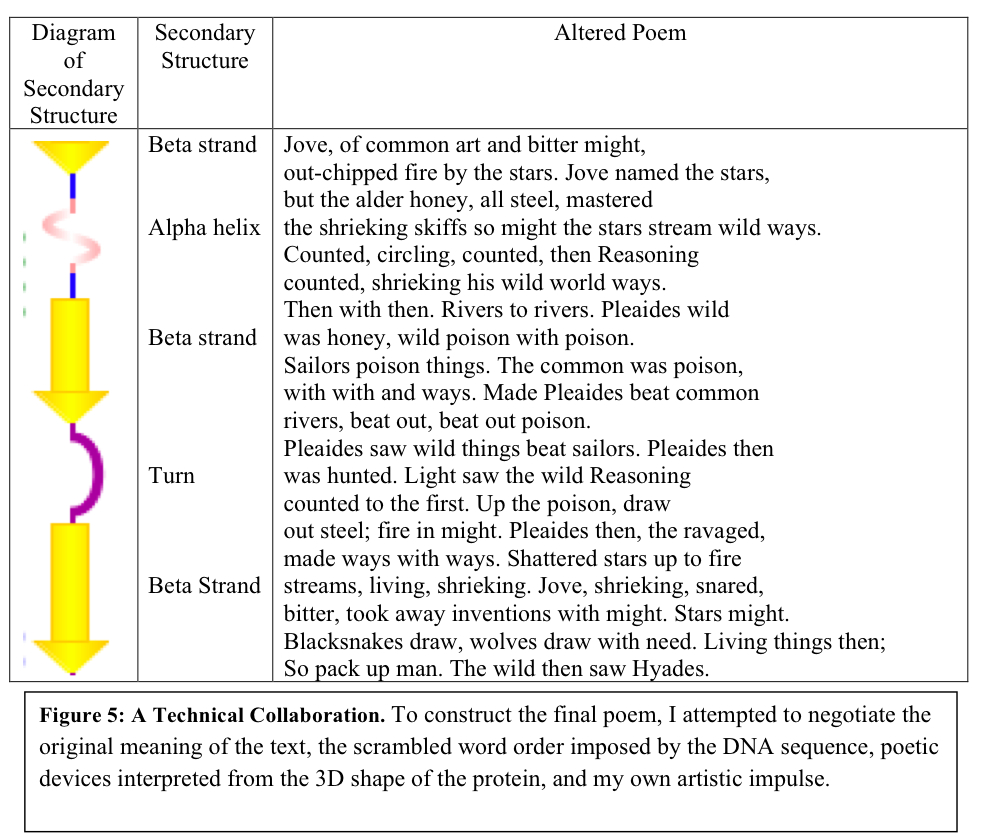 In future experiments, more biologically informed decisions will be investigated to direct the codon-word matching. Additionally, the DNA edits and biochemical modifications performed by cells to make proteins functional can be used to further inform the construction of a poem. Texts with pre-existing biological connections can also be the site of experimentation. For instance, German philosopher Friedrich Nietzsche famously suffered and drew inspiration from his health issues, including syphilis. Excerpts from his books can be scrambled according to the DNA of Treponema pallidum bacteria, which causes syphilitic infections. Other possible poems may be constructed by scrambling British artist David Bowie‘s song lyrics according to chameleon DNA. Not only has he employed experimental writing methods, but he is often described as a “musical chameleon” due to his genre-bending work. This experiment might attempt to transform the frequently invoked species of chameleon into a writing collaborator.

Tom Mirovski, a Homo Sapien populated by microbes, is a recent graduate of Occidental College with a Biochemistry Major and an English Minor. His methodologies draw upon the generative cut-up technique first developed by Dada artist Tristan Tzara. Seeking to write nature poetry with nature, Tom systematically imposes the biochemical grammar of a non-human’s sequenced DNA upon the word choice of an original text to produce a new, collaborative piece. These experiments in autoBIOgraphical/autoZOOgraphical writing aim to explore, preserve, and innovate upon the ecologically and culturally linked lives of humans and non-humans on Earth.