The mold grew bored with me——volcanically——a Blue China vase——the shape of which
resembled the mold——the mold the shape of the mold——and nothing else.
If “structural consistency is a fallacy,” (Berlant)——and democracy is a fantasy of freedom & progress, (Ranciére)——there is a divergence in thought where “the formal imagination is one of composition, the material imagination is one of combination” (Bachelard).
The frays of myxamoeba (fulgio septica)——frays of indigo unsaturated my skirt——the mold grows where the soft bottom left——a big rock——& i=I think
with multiple slits in my big tent bod.
The conceptual world is built from collisions with everyone’s bubble-headed genres: the sad sack, a synthesizer, a Christmas wreath——wrapped
stained——chimed——don’t be so
you look so good it looks so good on you——yes im sure
no of course not——it matches the

The limits of knowledge not as the limits of language but of the fact of being just one body. 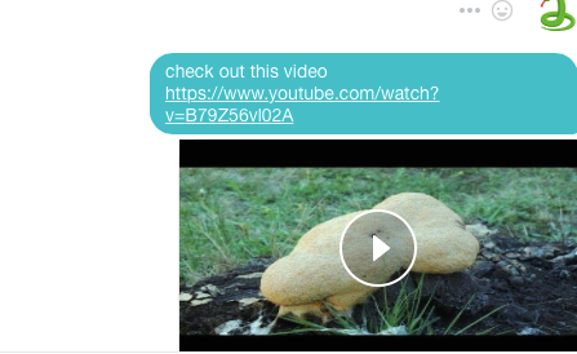 I’ll direct the propinquitous——to this myxamoeba (fulgio septica)——https://youtu.be/B79Z56vl02A——Over the course of a night the mold has replaced the rock like a big yellow wig.
It’s a fist-sized rock.
Is this madness? the way you are laughing it’s catchy——it bubbles, frothy so hard
i spit out my drink! hahahhaha——omg “By midnight it had reached this point. I thought it had stopped advancing.”
Biologically “These mega-amoeba are forming a structure at a high point to help insure better dispersal of the spores that will be formed.”——The mold grew bored with me gradually——Collision & saturation & dyeing & coloration is what is a world——You said

Are you contagious? and I said
i went home for a wedding where my childhood best friend said i’m like an anti-millenial i lived for so long without the internet or a phone——so now writing
resembles naturalism——The process of drawing or describing the new world with translatable metaphors: folie à deux, folie à plusieurs
Or the metonymic: (where a metaphor seeks to clarify, it also privileges possibility).
Metonymy, as I have used it, eschews possibility in favor of the pile-up of available forms.
A material growth ——layering ——saturating ——soaking ——immersing ——to mimic a world of abundance & difference rather than a singular or hierarchical “truth” ——“Fuligo septica is also called the scrambled egg slime mold and other less flattering common names.
Be sure to watch this in HD. 1080p preferably.”——The mold grew bored with me——Anarchically 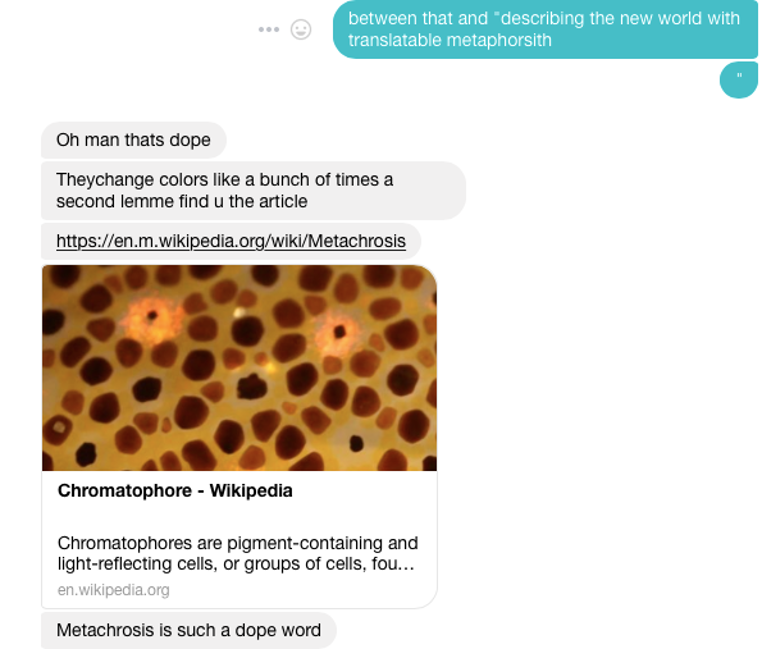 Taking the incommensurate as the ontological——Expression is translation——Or adaptation——Not just from language to language——But sense to thought to language to touch to see——I adapt and the mold grows bored with me
like mad
-ness in a cult of origin: where did that come from (for you)? not trying to get at the origin’s authenticity, but understanding the journey as its means of valuation——12th century sculptures made from mother-of-pearl, for example——A pieta made from fished-for clams——For novelty of technology——Seafaring as a form of artmaking——i would get so upset at her for copying my outfits
i would get so upset at her for pretending to read what she hadn’t read
because it was fashion for her but to me it was food 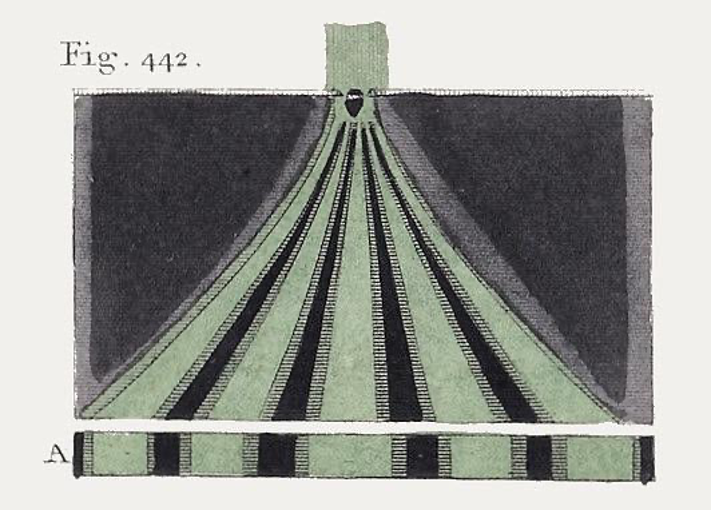 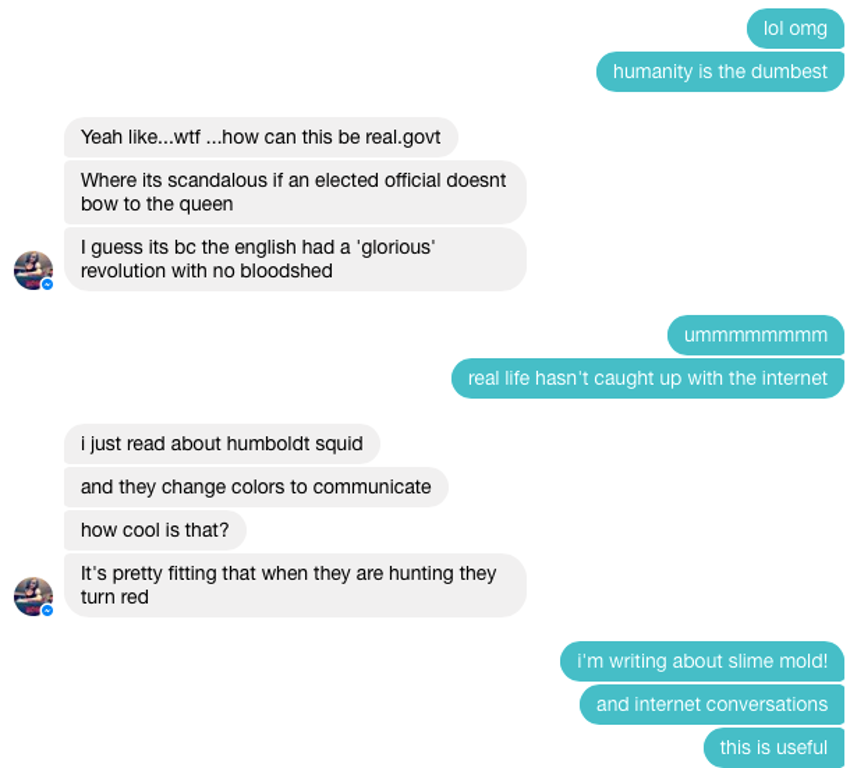 In J.M. Coeztee’s novel Elizabeth Costello, he describes an artisan who spent his whole life carving crucifixes of various sizes: I don’t have the book with me so I can’t quote it——
But I think he asks——What does it mean to spend a lifetime carving the same figure, for the same purpose, at a variety of scales or speeds?——Is he the futile copy of a factory machine?——Why should that be valued less than, say, Rimbaud’s teenage fever dreams?——“Thomas Young (Life time: 1773-1829) – Original publication: A Course of Lectures on Natural Philosophy and the Mechanical Arts- YOUNG, Thomas Immediate source: This jpg created by me (who releases all rights) from a jpg emailled to me from a bookseller (www.jonathanahill.com) who was selling the book. Bookseller was responding to email asking if okay to send image to Wikipedia, told that meant giving up his rights.”

We spent a whole day piecing together tissue paper to make kites but it rained so hard in the afternoon we could not go to the cemetery to fly them.
“Atmospheric attunements” & her ear for cadence, tune, voicing (Stewart) ——The slime mold video is best watched to a Floating Points soundtrack ——There ought to be no linguistic similitude between the title, the video and what I’ve just described
but I can see how you might think that.
My life was entropic once ——& easily understood because I was a foreign particle ——As my bodies enmesh I learn what matters to the atomized degree of me ——Not in representations ——But singular or cultural heliotropism ——How the mold orients to the suns that grow it ——Or deprive it of light.

Away from home? again? and?
Mimesis: adaptation that does not reify/reproduce old structures ——“Why? Because I recently obtained fresh spores and found that microscopic portion of this original video contained a flagellate species that was not Fuligo septica. My bad!”
As relation to its reader ——This is why I became disillusioned with the “poem” as such ——The poem as a product of its embodiment
“Check out the new link if you want more accurate cell science:” 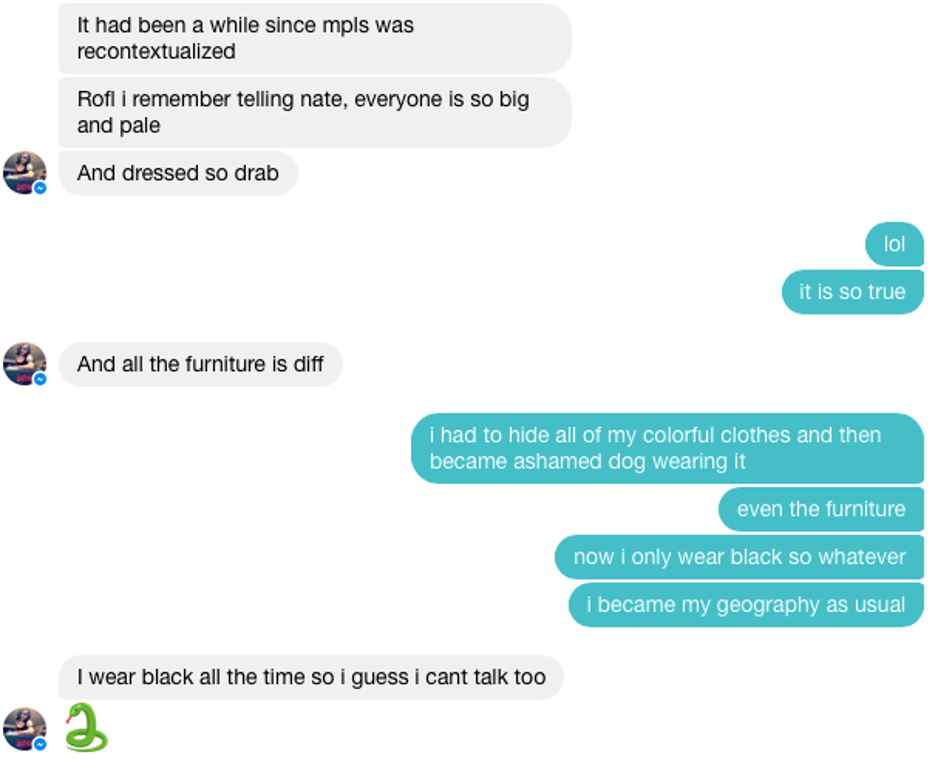 & needing no translator
It did not have to be “in the world.”
The poem is a Blue China ingot or an undiscovered species——It waits for no one——Slime mold timelapse 8 hours in one minute ——A means for “passing through,”——& in this way spectral voices, “echoes” pass like wind through the wound ——The mold grew bored with me ——Multiply
she basically said i was kitsch ——“The purpose of this behaviour is un-like microscopic amoeba that engulf items for nutrition.”
In our alliances——Hunched over subtleties——Devoured
I was not prepared for possession——or transference

Megan Jeanne Gette is author of chapbooks Poor Banished Child of Eve (H_NGM_N, 2016), OMBLIGO/INTAGLIO (Ricochet Editions, 2019) and The Walls They Left Us (Newfound, 2016). Her work has appeared in Cultural Anthropology, Minor Literatures, Cloud Rodeo, 3:am, DIAGRAM, BOAAT, Tupelo Quarterly and elsewhere. She won the 2015 Gloria Anzaldúa Poetry Prize and the 2017 Black Warrior Review Flash Prose Prize (2017), and was runner up for the Society for Humanistic Anthropology (SHA) Ethnographic Poetry Prize (2017). She holds an MFA from the University of Minnesota and is a PhD student in Anthropology at UT Austin.